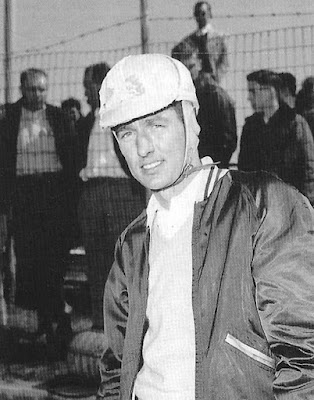 Spencer, Iowa (September 19, 1953) – Lanky Bob Slater, Kansas City, continued his winning streak here on Saturday afternoon by coming home in front of a strong field in the 25-lap feature for IMCA big cars, which wound up the speed program of the Clay County Fair.

A crowd of 13,000 jammed the grandstand and infield for the races.

Slater took over the lead in the feature race on the first lap but was pushed for the first 15 laps by Bobby Grim, Indianapolis, who rode Slater’s bumper most of the way.

Grim lost control of his Honore Offenhauser on the fourth turn and spun completely around directly in front of the oncoming field. Some skillful driving by others adverted an accident but Grim was finished for the day.

Vito Calia, Kansas City, who had been running third, picked up the chase on Slater and pressured him but Slater held strong and pulled away on the final lap.

Calia came up with a victory in the first heat, nosing out Jimmy Campbell, Bates City, Mo. Slater and Don Branson, Champaign, Ill., put on a dandy speed duel in the second heat with Slater winning.