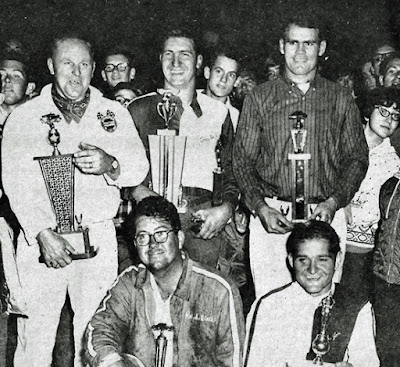 Knoxville, Iowa (September 2, 1967) – Joe Saldana of Lincoln, Neb., led all the way in the 30-lap super modified season championship on Saturday night before a crowd of 2,100.

Saldana earned $450 for the victory.

Bill Utz of Sedalia, Mo., who arrived late at the track after competing in an International Motor Contest Association program that afternoon at Lincoln, Neb., finished second in the main event, good enough to clinch the point championship at the Knoxville half-mile.

Tom Corbin of Carrollton, Mo., was third followed by Ralph Blackett of Des Moines and James Bond of Edwardsville, Kan.

Earl Wagner of Pleasantville, Iowa, lost a wheel on lap 24 and hit the outer fence hard but was not hurt.