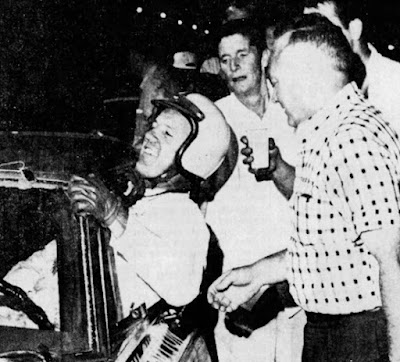 A smiling A.J. Foyt climbs from his car and is greeted by car owner Ray Nichels after the Houston, Tex., driver came from dead last to win the State Fair Century.

Indianapolis, Ind. (September 9, 1964) – Read here, race fans, and you will learn, of the thrilling ride of the new Paul Revere.

A flashy young Texan with a heavy foot mounted his flashy “borrowed” steed and sped through the night. To climax a fairy tale, it need only be said, that A.J. Foyt had victory in sight.

It was the same fairy tale that has enveloped the 29-year-old Houston hustler throughout the year. In this year’s 500-mile race, Foyt shunned the cries that the front engine roadster was dead. He won easily.

Sutton, who was injured in last month’s championship race at Milwaukee, toured the one-mile dirt oval in 45.17 seconds. Sutton offered the reins to Foyt, whose own Dodge blew an engine and didn’t complete a practice lap, when race officials decided to allow 30 cars to compete – 10 more than originally planned.

And despite eight yellow flags for a total of 38 laps, Foyt broke his own track record by touring the 100 laps in 1 hour and 20 minutes, for an average of 75 miles per hour.

“All I did to this car was hop in and set the air pressure.”

“It was a tough race until Parnelli (Jones) went out. What happened to him?”

That was a question every one of the 13,573 fans were asking. Jones, who took the lead on the third lap from record qualifier Bobby Marshman (88.322 mph), had paced the field for 56 laps. But, then on lap 60, going through the third turn, Jones, red, white, and blue Mercury kept right on going, causing extensive damage when he hit the outside guardrail.

Jones’ brakes had heated up and when the Torrance, Calif., driver went to put them on, there was nothing but fence to stop the leading USAC stock car driver. The mishap also took out Lloyd Ruby’s Plymouth out of the running.

Foyt’s start had been breath taking. From his 30th starting position, he moved past 14 cars on the first lap, including eight on in the first quarter mile. He was in 13th by lap 5, ninth by lap 7, sixth on lap 13, and fourth by lap 18, and finally third on lap 19.

But he wasn’t finished. For the next 20 laps, it was Jones - Don White – Foyt - bumper to bumper all the way around the track.

Jones’ Mercury was obviously faster in the straightaways, but Foyt would close the distance in the corners.

Jones, leading the race during the four cautions, brought the boos from the grandstand crowd because of his running too slow during the yellow flag. But the former Indy 500 winner wasn’t looking for another fine by USAC (he was fined $1,100 for running too fast under yellow at Milwaukee) and he kept the pack bunched up behind him.

Marshman, the hard-luck guy in any kind of Ford this year, drove a great race, having a costly pit stop to change one tire after picking up a nail on the track. Despite the one-lap loss, he fought back and finished an impressive third.