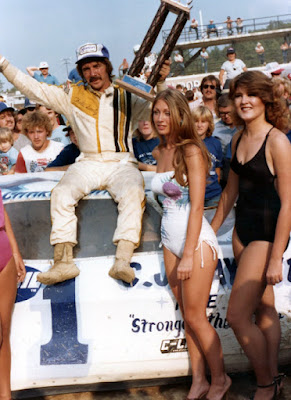 Charlie Swartz celebrates after winning the World 100 at Eldora.

Swartz, who pocketed $13,000 for the triumph, gained the lead on lap 29 of the high-banked half-mile clay oval when race leader Rodney Combs retired to the pit area with a blown engine. Combs had just assumed command of the top spot from Larry Moore in the previous circuit as Moore had dropped out with a blown head gasket after leading laps 24 – 27.

Combs had paced the event’s initial 26 circuits as he got the jump on Moore at the start.

With both Combs and Moore sidelined, Swartz built a nine-second advantage over Tom Helfrich when Bubby James and Gundaker tangled entering the north turn on lap 40. James crashed into the outer retaining wall while Gundaker recovered in time and didn’t lose his position. The caution period required to tow James to the pits which allowed Helfrich and Gundaker to close in on Swartz’s rear bumper.

Swartz immediately rebuilt a healthy margin over Gundaker, however, the Lucasville, Ohio, jockey was caught in heavy traffic at the 60-lap mark and Gundaker quickly closed in on his back bumper.

Clearing traffic first, Swartz burst ahead of Gundaker once again for five circuits. The final caution for Roger Long’s stalled car three laps from the checkers allowed Gundaker one more attempt to overtake the blazing Swartz but he was not to be denied as he became the tenth different winner of the crown jewel of dirt late model racing.

Running a lap down at the finish and placing third and fourth respectively were Dave Speers of Campbellsville, Ky., and Fred Horn of Marion, Iowa.