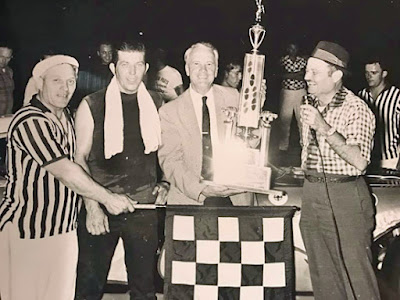 Blue Island, Ill. (August 2, 1970) - Raceway Park is the home of the short track Monza style events. The first one was held in 1957, shortly after the big event in Monza, Italy and Saturday night, Raceway held its first such event of the 1970 season.

It consisted of three, 30-lap features for late models with the final victory going to the top point driver after three races.

Kullman accumulated 285 points out of a possible 300 by finishing 1st, 2nd, and 3rd in the three features, defeating Bud Koehler and George Hill by 5 points, as they tied for second with 280 points each. Hill won two of the features but finished 5th in the other after spinning during early laps.

Feature #1 -
A field of 20 started, led by Bill Harper, who spun on the 2nd lap and lost the lead to Vern Mullennix. James Bond gained the top spot on the 3rd lap and on the 5th, Hill spun while running a close 3rd place.

Kullman, who started 13th, took the lead on the 9th lap, and raced his 1969 Chevelle to victory ahead of Bud Koehler, Jerry Kemperman, James Bond, George Hill and Ray Para. The fourth-place finish for Bond was his best feature effort of the year.

Feature #2 -
Only 17 starters took the green flag and Mullennix grabbed the lead, then the race was halted on the 3rd lap after Ray Freeman spun and was hit solidly by Bill Harper. Both cars stalled on the track in a dangerous position.

Kullman took the top position on the 7th lap and held until the 15th, when Hill passed him on the inside. Hill scored his 10th win of the year over Kullman, Koehler, Para, Gary Mitidiero and Danny Autullo. Jerry Kemperman was racing a close 3rd when he spun out on the 29th lap.

Feature #3 -
It took Kullman only 8 laps to run thru a field of 17 late model cars and he led until the 17th lap, when Hill again moved out front. This race was stopped on the 24th lap after Gary Mitidiero and Danny Autullo hooked wheels and spun entering the 3rd turn.

After the restart, Hill rode to his second win of the evening and his fifth of the year, in his 1965 Chevelle ‘350’. Koehler finished second; Kullman third; Kemperman fourth; Para fifth; and Bill McEnery sixth.