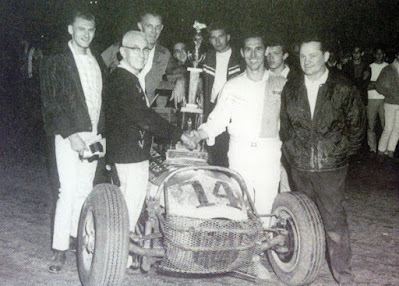 Knoxville, Iowa (August 12, 1967) – Dan Krueger of Kansas City, Mo., was killed Saturday night at the Knoxville National Super-Modified Championships when his machine crashed into the rear of another during the 10-lap consolation event.

Krueger, 27, was dead on arrival at Collins Memorial Hospital in Des Moines.

Krueger, who had won a heat race earlier, hit the rear of a car driven by Stan Borofsky of Kansas City on the third turn of the third lap.

Two other cars had spun out moments before. Borofsky said he slowed down when the red light went on and Krueger's car hit him. Krueger's car flipped several times.

Borofsky, leading at the time of the accident, won the consolation. The race was restarted three times because of accidents.

Two other drivers were hospitalized.

Jim Williams of Cedar Rapids, Iowa, formerly from Des Moines, crashed in a heat race and suffered a broken back. Hank Smith of Mount Ayr, Iowa, was not seriously hurt when his car flipped on lap 9 of the feature.

Ken Weld of Mechanicsburg, Penn., a two-time national super-modified champion, spun out on the sixth lap of the big race. He attempted to get back in the field but was black flagged off the track.

Saldana had the hottest car in the field. He smashed the one-lap record on Thursday night in qualifying with a time of 21.45 seconds; then had engine trouble and made an emergency trip back to Lincoln for repairs.

He had the lead from the start in the championship race and seemed to have things his own way as he flashed through the third turn on lap 13.

Then the wheel came off. Saldana got back in the race - at the rear of the pack - and then charged back through the field, only to finish in seventh place.

Krueger was the second driver killed on the Marion County Fairgrounds track this year. Brad Teter of Des Moines was involved in a fatal accident July 1.