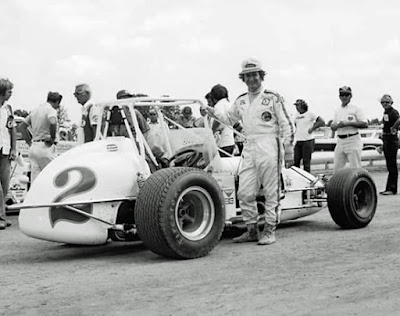 Bigelow, driving the Leader Card – Lodestar Ford, averaged 92.776 miles per hour in recording his second career win in the division. His other win was also scored at this track on May 28, 1972.

A giant cloud of dust erupted when the 24-car field took starter Ray Chalke’s green flag. But, the dusty conditions which had been a problem in the two previous days of racing here was somewhat improved.

After 25 laps, Bigelow and Unser had pulled away from the rest of the field and began lapping the tail enders.

A number of cars brushed the wall, but the day’s first yellow didn’t fly until lap 47.

It was then that Unser, who was challenging Bigelow, went wide into turn one and smacked the outer wall. His Viceroy Ford had to be towed to the infield, but Unser escaped injury.

When racing resumed on lap 52, only Rice, Sessions, Jimmy Caruthers and Jackie Howerton remained on the same lap as Bigelow.

The only driver to mount a serious challenge to Bigelow was Rice, who pulled to within one-half second of the leader in the closing 10 miles. But, then Bigelow accelerated, padding his lead by a few more car lengths.

Rice, as he admitted afterwards, ran out of bravery, not wanting to jeopardize his runner-up position. The race was only Rice’s second ever in the division, the other coming at Sedalia, Mo., where he crashed while running second.

Sessions brought the Smith Chevy home in third and Caruthers fourth in the Pizza Hut Ford. Caruther’s finish enabled him to increase his lead in the point standings over Art Knepper, who finished fifth in the Patterson Driveshaft Chevy.

The hard-luck driver of the day was Rollie Beale. After starting 21st, Beale made his way to third by lap 62 and probably had the fastest car on the track. However, just as Beale was pulling up behind Rice, he hooked a rut exiting the narrow turn two and clobbered the outside guard rail.