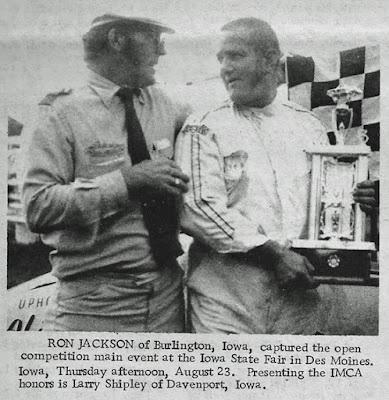 Des Moines, Iowa (August 23, 1973) - Ron Jackson of Burlington has had a “terrible” season of auto racing, but things were looking much brighter to him after he won the 25-lap Iowa State Super Stock Championships feature Thursday at the State Fair.

“It’s unbelievable the car performed as well as it did,” the 31-year-old truck driver said after the race, which was witnessed by an estimated 7,000 fans.

“We’ve been racing at Eldon and Oskaloosa and haven’t been able to do anything all season. Then we come up here and win.”

Jackson won the first heat with his 1973 Mercury Comet and, as a result, started the feature on the front row pole position.

He grabbed the lead when the green flag fell and led for the first two laps. Darrell Dake of Cedar Rapids, driving a 1972 Nova, had started beside Jackson.

The lead see-sawed between them several times on laps three and four. Then Jackson went ahead in the second-turn on the fifth lap and led the rest of the way.

Dake, Lem Blankenship of Keokuk and Don Hoffman of Des Moines were eliminated because of an accident on the 15th lap.

Cal Swanson of Reinbeck, in a 1968 Chevelle, and Stan Stover of Reinbeck, driving a 1978 Nova, finished second and third, respectively. Joe Merryfield of Des Moines was fourth.

“I’ve been racing the Comet since July 1,” Jackson said. “We've made several major changes on it, but it just hasn't worked right. This week we put 250 pounds of lead over the rear wheels and it looks like we have it all together now.”

“The track was dry-slick today and 1 was able to get a good bite, Also, I got the break by being in the hot spot (pole starting position) and I got the jump.”

“If Dake had been the leader first, I doubt if I would have passed him.”

Blankenship, driving a 1972 Monte Carlo, was trying to pass Dake in the fourth turn on the 15th lap when their cars smacked together. Both were sidelined. Hoffman, running close behind, had nowhere to go and got into the melee, He also watched the remainder of the race from the pits.

“I guess Dake didn't want me to pass,” Blankenship said. “I was halfway by him and I got shoved into the wall.”

Dake said he didn’t know what happened. He and Hoffman thought Blankenship was responsible.