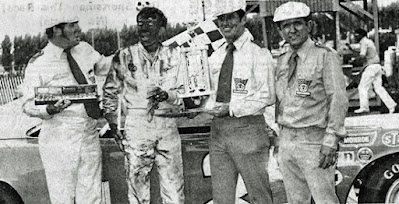 Des Moines, Iowa (August 18, 1973) - His tires were worn thin and he was involved in a collision, but Mike Derr of Keokuk, Iowa, scored his first victory in a long race on Saturday, winning the 200-lap International Motor Contest Association event at the State Fair.

The 25-year-old business education teacher at Central Argyle High School led for the last 124 laps in the 100-mile grind over the half-mile dirt track.

A crowd estimated at 8,000 saw young Derr, son of 12-time IMCA champion Ernie Derr, finished 1½ laps ahead of Stan Stover of Reinbeck, who was competing in his first race over 50 miles. Gordon Blankenship of Keokuk captured third, regaining the lead in IMCA point standings.

Derr was pushed into the wall in the fourth turn on the ninth lap when Eddie Anderson of Grinnell lost control of his 1972 Chevelle. Mike was trying to pass in his 1970 Dodge Charger at the time.

“I thought Anderson might lose it (control),” Derr said. “I should have backed off.”

“The car apparently was not damaged too badly. I thought the front end might be out of alignment after the impact, but the car steered okay.”

“The guys (his pit crew) warned me to take it easy for the last 50 laps because of the tires. And they were right. The right rear tire was really worn and wouldn't have lasted much longer.”

Mike has been flirting with victory in long races at the Fairgrounds for three years. He was second in the Firecracker 300 July 4. He said he won 50 and 25-lap races at the Missouri State Fair in 1971 and 1970, respectively.

“I almost didn’t compete,” Stover said. "I debated about running all the way down here this morning. I finally decided to go ahead. The car has been running great.”

“It is the longest race in which I have ever competed. I sure am glad I decided to run now.”

Stover, one of the top drivers in regular Saturday night racing at the Fairgrounds, won $750. Derr went home with $1,000. Blankenship had problems with his 1972 Plymouth Duster but still finished third. He had trailed Ferris Collier of Lampe, Mo., by 10 points in the IMCA standings going into the race and Collier did not earn any points.

Gordy, who earned 90 points, said he had to take it easy the last 120 laps. “It was kicking all of the oil out,” he said. "There was a crack in the oil pan. Also I had some problems with the back end.”

A few minutes later he reported the right rear wheel fell off when he jacked up the car. He said a bearing had burned out.

Stover completed 199 laps and Blankenship 197. Collier was forced out of the race on the seventy-fourth lap when he was involved in am accident with Bland Robinson of Des Moines and Eddie Anderson of Grinnell, the 1949 IMCA national champion, who was competing in his first race since 1952.

Anderson spun and Robinson went wide to miss him. Collier was passing Robinson at the time and was forced into the wall. He said the same thing had happened to him at Wausau, Wis., last Sunday when he was leading a race.

Fred Horn of Marion, Iowa, was another leader in the race. However, he was sidelined on the 145th lap with engine trouble.

“It was pumping out a lot of oil,” said Horn, who was driving a 1970 Plymouth usually driven by Irv Janey of Cedar Rapids. Horn, who has sold his race car, said he would return for the 200-lapper next Sunday and “get revenge.”

He passed Stover in the third turn on the 61st lap but Stan went ahead on lap 70. He was in command until the seventy-seventh lap when Derr took over permanently.

There were 14 yellow flags in the race and it was run under those conditions for 29 laps because of accidents and spinouts. There were no serious wrecks. Bill Wrich of Kennard, Neb., who was running second and elsewhere in the top five early in the race, was sidelined with engine problems on the 111th lap.