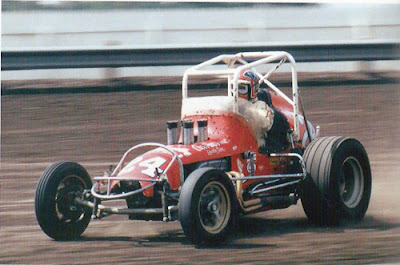 Knoxville, Ill. (August 4, 1972) - It seemed only fitting that after two years as national sprint car champion Jerry Blundy would end his reign before a hometown crowd.

The local favorite, who was seriously injured in a race wreck last month, appears to be out for the remainder of the season. He had built up a formidable lead in the International Motor Contest Association point standings early in the year, only to have the mishap at Webster City, Iowa, cut short his chances at winning three straight national titles.

Blundy's heir apparent, Ray Lee Goodwin of Kansas City, Mo., went into Friday night's sprint races at the Knox County Fair trailing Blundy by 10 points. Goodwin turned in second-best time in qualifications and then placed third In a heat race to take over the No. 1 spot in the standings.

But it was later in the evening that Goodwin proved himself as a viable contender for the IMCA national championship.

Weaving his way through the middle of the field, Goodwin scored a come-from-behind victory in the 25-lap feature event.

The hard-charging Goodwin throttled his Chevy-powered sprinter into the lead with four laps to go and coasted to victory behind the wild cheers of area race fans . . . it seemed only fitting.

The field was divided up into three heats, with the fastest qualifiers put in the back rows - IMCA's inverted-order start.

Despite two yellow flags in the opening-heat race, Perkins battled from last to first. He took over the lead with three laps to go and coasted to victory. Sutcliffe finished second.

In the next heat race, Earl Wagner stormed into the lead on the third lap and had an open track to run on the rest of the way. He set a new record in winning the 8-1ap race.

The third heat consisted of only five cars, since three others were unable to compete due to mechanical difficulties. Cliff Lilly of Claycomo, Mo., led from start to finish; his winning time was 3:31.80.

The fourth event of the evening race card was the STP match race. The four fastest qualifiers clashed head on in a 5-lapper with Babb winning in record time. Goodwin was also in the match race but had to be scratched when his car began having engine difficulties. It appeared doubtful if his sprinter would be ready for the feature event.

Cars which failed to qualify for the feature had one last chance in the 10-lap consolation event. Following up his victory in the match race, Babb won the consolation by five car lengths. Ralph Parkinson Jr. and Bill Burks Jr. earned spots in the main event by placing second and third.

In the wreck-marred feature, Goodwin ran third for more than half of the race. On lap 16, he slipped into second place and then with just two miles left to go, he powered into the lead.