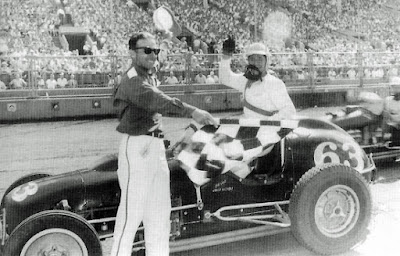 Don Johns, 28, of Bellflower, Calif., was killed and Harvey Konkel, 30, of West Allis, Wis., was hospitalized in critical condition with burns over 60% of his body.

The accident, which occurred during the third heat race, saw Konkel lose control of his racer as he entered fourth turn. The car slid into a five-foot wall west of the grandstand, which was filled with 11,200 spectators, bounded off and rolled into the path of Johns. Johns’ car struck the rear of Konkel’s machine, flipping both cars end over end.

The Konkel car, now in flames, slammed into the pit area near the judge’s stand, scattering officials and pit crews.

Two mechanics ran to Konkel’s car, tried to beat out the flames and rescued the driver.

Meanwhile, other mechanics wrenched Johns’ crushed body from his upended car in front of the grandstand. He was taken to a local hospital where he was pronounced dead upon arrival.