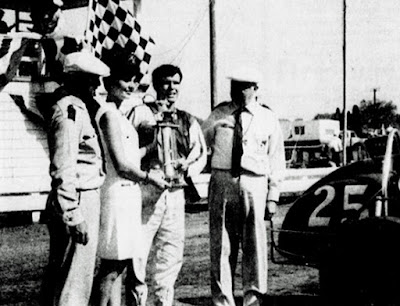 Wade, starting on the front row outside by virtue of a racing rule that inverts the fastest six qualifiers, captured the lead from Dale McDaniel of Houston, Tex., on the first circuit and went on to win in record-breaking time.

Second place went to Dick Sutcliffe of Kansas City, who started in third spot and outdistanced McDaniel midway in the race. Sutcliffe was closing the gap on Wade's #25 Chet Wilson sprinter as the checkered flag fell, and his pressure undoubtedly had something to do with Wade's rapid time of 13 minutes flat for the 15 miles. The old mark was 13 minute and 19 seconds, set two years ago by Jim Moughan of Springfield, Ill.

The slick track contributed to a number of spinouts, including one by Al Murie of Kansas City during the feature which brought out the yellow flag for two laps.

In the day s only mishap, 21-year-old Ron Perkins of Bethalto, Ill., lost control of his car during qualifying trials and slid into the outside rail of the south turn, after which the race car flipped twice, once sideways and once violently end for end

Perkins was shaken but otherwise uninjured, thanks to his car’s sturdy roll bar The vehicle sustained only minor damage, although it was sidelined for the balance of the afternoon.

The race sanctioned by the International Motor Contest Association and supervised by National Speedways, was the first of seven speed events scheduled during the 1968 exposition.