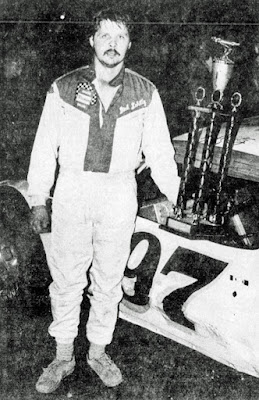 Dick Schiltz shows off his trophy after winning the Challenge Cup VII.

Huron, S.D. (August 28, 1979) - Somehow, between all the caution flags and confusion, the Challenge Cup VII race finally ended with Dick Schiltz of Waterloo, Iowa, joining an elite group of late model drivers who have won the coveted race.

The lead changed hands four times with Schiltz leading at the start of the race and at the all-important finish. Sandwiched between were bids by Huron's Dennis Selting and Waterloo, Iowa’s Tom Bartholomew to establish control.

Selting, last year’s Challenge Cup champion, led for just one lap, but remained near the front of the 27-car field to place second Bartholomew was third, followed by Joe Kosiski of Omaha, Neb., and Sheldon Reding of Harrold.

The large purse could be blamed for some of the delays in the racing program as drivers were constantly struggling for an improved position, even when that position was not entitled them.

Several restarts were hampered by drivers failing to take their correct spot in the line-up.

Problems aside, the Challenge Cup VII race was considered a success by promoter Tony Dean. The 42 late models represented some of the Midwest’s finest racing machines and competition was constantly fierce.

Schiltz started on the outside front row position in the 50-lap main event and he utilized that spot to establish early control. For 16 laps he was untouchable, then Selting slipped by for a brief stay in the lead The next lap. Bartholomew took the lead and led until Schiltz moved back on top in lap 39.

Schiltz, a heat winner and ninth place finisher in the highly successful KIJV South Dakota 100 held earlier this month, was one of six heat winners in Challenge Cup. The remaining heats were won by George Jundt of Aberdeen, Dwaine Hanson of Lakefield, Minn., Bartholomew, Selting and Reding.