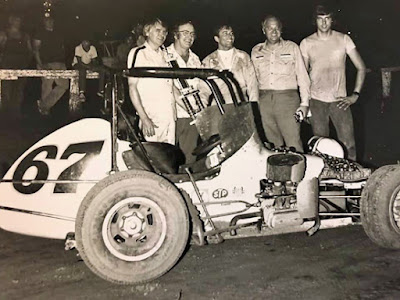 Johnny Parsons is joined by his crew after his victory at Paragon.

Parsons opened the show by setting fast time with a 17.685-second clocking for one lap around the 3/8-mile dirt oval, which had been soaked by a heavy downpour earlier in the day.

With threatening skies on the horizon and only 24 cars on hand, officials decided to run the 40-lap main event immediately after qualifications, starting all 24 racers in the contest rather than the customary 20.

Making his midget debut, Sheldon Kinser started the feature on the outside of polesitter Dennis Dorsey but had trouble negotiating the first turn and a eight-car pileup ensued.

When the contest was restarted, Wes Stafford vaulted into first place, but on the second lap, Parsons, who had started ninth, took over.

Parsons remained in front the rest of the way to capture his tenth midget triumph of the campaign with Stafford taking second.

Chris Cumberworth was third ahead of Mel Kenyon, Lonnie Caruthers and Larry Patton.