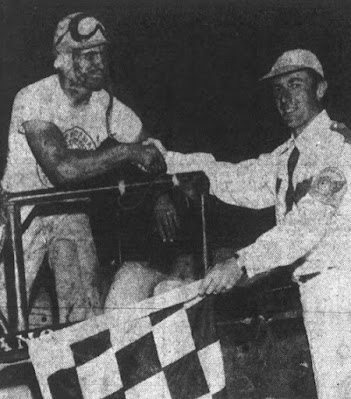 Ramo Stott of Keokuk receives a handshake and the checkered flag from starter Jake Bozony of Minneapolis after winning the 200-lap stock car feature that wound up the 1960 All-Iowa Fair. – Bob Strempke Photo

Cedar Rapids, Iowa (August 21, 1960) – Ramo Stott chauffeured his 1960 Ford convertible to one world record and nearly set another Sunday at Hawkeye Downs as the late model stock car brought the 25th anniversary of the All-Iowa Fair to a close.

The young Keokuk, Iowa, driver, won the 5-lap dash in the afternoon program in the record time of 2 minutes and 18.65 seconds, bettering the old mark of 2 minutes and 19.32 seconds set by another Keokuk driver, Ernie Derr, in 1959 at Oskaloosa.

Stott came back for the evening program before a sellout crowd of 8,000 to cop the grueling 200-lap event in 1 hour, 33 minutes and 4 seconds - just 2.75 seconds off the IMCA’s world record for a half-mile dirt track. He probably would have set the mark if the race hadn’t been slowed for about five laps for two separate spinouts.

The fans saw quite a battle all the way for the top spot. Stott, Joe Dolphy of Minneapolis in a 1960 Plymouth, and Lenny Funk of Otis, Kan., in a ’59 Plymouth were bumper to bumper throughout the entire grind. All three drivers were attempting to outlast the other as gasoline supply dwindled.

Finally, on the 147th lap, Dolphy gave up his second position to re-fuel. Within the next 10 circuits, the top four drivers all made a pit stop for gas. From then on, the top three were pretty well settled with Stott, Dolphy and funk finishing in that order.