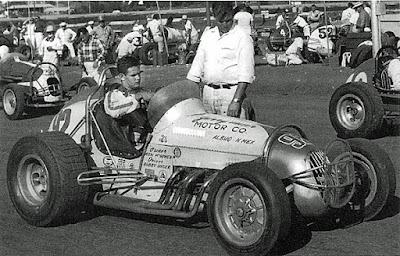 Al Unser piloted the McGowen Chevy to victory at Sedalia.

Unser captured the lead only two laps from the finish from Gordon Woolley, who had earlier astounded fans and racing personnel alike by moving from last spot to first in five lightning laps. And Woolley likely would have won had not his Weinberger Chevrolet developed a sour cylinder in the late stages of the race.

The classic got underway with Woolley on the pole, and he led for two brief laps before spinning out on turn two, Jerry Blundy of Galesburg, Ill., also looping to avoid a crash.

On the restart, Unser paced the single-file field, with Woolley and Blundy in the rear. But Unser lost his tremendous advantage when the McGowan Chevy, the same car in which his brother Bobby, won a year ago, slipped out of gear and he dropped back eight spots on the backstretch.

Woolley, meanwhile, was flying, passing car after car. He stormed to the front, finally getting past Gordon Johncock of Hastings, Mich., on the seventh circuit.

And all of the while, Unser and Blundy were picking up spots, Unser finally getting by Johncock on the 10th circuit. Johncock also relinquished third spot to Blundy on lap 30 when he pitted for fuel. Still another fuel stop put him out of contention.

Unser made repeated bids during the next 30 laps he was in second, but could never steam past Woolley, either inside or outside, until lap 47 when the Weinberger faltered.

Earlier, Woolley had shattered the IMCA World record for a flat mile track when he screamed around the oval in 35.78 seconds, eclipsing the 10-year-old mark of Jimmy Campbell’s 35.95 second mark set in 1953.