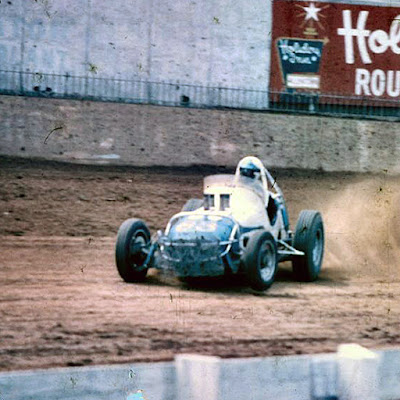 Allentown, Penn. (August 3, 1968) – Jerry Richert never trailed in winning the first of three races in the Keystone State Trophy Series on Saturday afternoon at the Great Allentown Fair – a race that was halted after 20 laps due to a spectacular first turn flip by last year’s two-time winner Bobbie Adamson.

Richert, who was forced out of the 7-lap trophy dash and failed to make his qualifying heat because the car would not maintain oil pressure, finally corrected the problem and copped the 15-lap semi-feature before walking away with the windup.

The two-time International Motor Contest Association point titlist and this year’s leader was never headed in the semi-feature which he won by three seconds over Lynn Paxton.

The afternoon’s main event, which never really got off the ground due to two caution flags, was halted prematurely on the leader’s 21st circuit when Adamson lost everything in the first turn. The race was scheduled to go 25 laps, but of the 20 that were already scored, 9 were run under caution.

Adamson, who proved last year that he knows how to handle a sprint car, was running quite well on lap 20, having moved from his 12th starting position to sixth place in only 11 laps.

Then he hit the first turn, the middle of which was like a washboard covered with marbles. He drove hard across a decided bump at the start of the turn and ended up sideways off the ground.

When he hit there was nothing he could do except ride it out. The car slammed down, flipped over, caromed off the wall and ended up on its roll bar facing in the opposite direction. Adamson, after a few anxious moments, unbuckled and crawled out of the car.

Eleven cars had been scored on the 21st lap – the lap of the mishap – when the red flag came out, halting the race.

Richert, the Forest Lake, Minn., driver who leads this year’s IMCA point’s race by 780 markers over Benny Rapp of Toledo, Ohio, picked up $400 for the victory.

Richert, who tested on Thursday afternoon, found a strong groove about three-quarters of a way through the turns. The difference may have been the tires he used – ordinary recapped snow tires built onto racing tire casings. They cost him only $12 apiece.

Linder, who qualified for the feature by being one of the top seven point men in the standings, started in the 13th position. He scrambled past three cars on the first two laps, waited out the caution until lap 7, then moved out again.

By the time Richert was halfway through the eighth lap, Linder had gone by Gene Varner, who was running fourth, and Darl Harrison of Tiffin, Ohio. He stayed solidly entrenched in fourth place until the end.