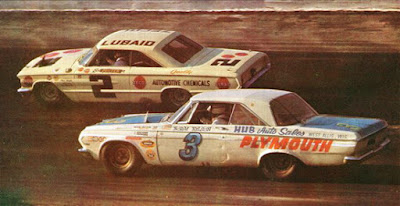 Bobby Marshman, driving the Zecol Lubaid Galaxie (2) passes Norm Nelson (3) on his way to victory at the Illinois State Fairgrounds.

Marshman was in third place for most of the race as A.J. Foyt of Houston, Tex., led the field for the first 57 circuits. Foyt lost the lead when he was forced to make a quick pit stop to fix a banged-up fender which was rubbing against his tire.

Joe Leonard of San Jose, Calif., took over the lead but was forced out briefly thereafter due to a worn tire and fuel leak.

With Leonard gone, Marshman inherited the top spot with only eight laps to go and ran unchallenged the remainder of the way. He averaged 94.41 miles per hour in the winning effort.

The one-mile dirt oval was jammed with 31 starters, however, only 19 were still on the track at the finish.