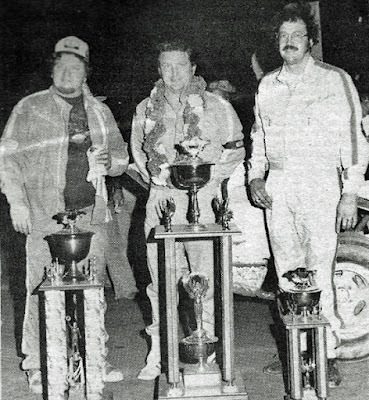 Rounding out the top five were Roger Dolan of Lisbon, Iowa, and Ken Walton of Viola, Iowa, who led the race from the opening lap until a red flag stopped the action about a third of the way through.

The best finish for a non-Iowan was sixth by Bob Kosiski of Omaha and Clayton Petersen Jr. of Grand Island, Neb., wound up seventh after starting 21st.

“The car was set perfectly tonight for this track,” a happy Hoffman said. “I thought it would get dry-slick before it was over and that’s what we set it up for.”

Walton, who won a special trophy dash from among the eight heat winners from two nights of qualifying, earned the pole position and led throughout the early going. After the red flag, however, he faded to fifth.

Red Dralle of Evansdale, Iowa won the “B” feature event to earn the 24th starting spot in the main event and he moved all the way to finish 11th in the feature.

The “C” main went to Bill Sanders of Muskogee, Okla., who had been relegated to that event after he had a tire go flat in his heat race. Sanders qualified for the “B” but again, lost a tire.

Marion Smiley of Tucson, Ariz., lowered the track record with a one-lap run of 20.21 seconds on Friday night. The old record was 21 seconds set by Clayton Petersen Jr.