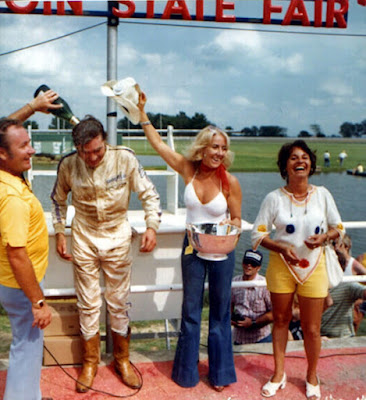 Du Quoin, Ill. (August 27, 1977) – Somebody offered 38-year-old Paul Feldner of Colgate, Wis., a bottle of champagne instead of the traditional bottle of milk after he won the 100-mile stock car race at Du Quoin on Saturday afternoon.

The victory called for the more-than-usual celebration because it was Feldner’s first triumph in a United States Auto Club event.

Many of the 8,659 fans attending could recall that A.J. Foyt, an unheralded driver in his early 20’s, also won his first USAC event at Du Quoin in 1960. Foyt has since won more USAC championships than any other driver.

Feldner not only earned the $4,100 first-place money out of the $23,000 purse, he also picked up 250 points to give himself a tie with race runner-up Sal Tovella of Addison, Ill., for the season point’s lead in the stock car division.

The race was hardly an artistic success ass the time of 1 hour, 21 minutes and 6 seconds translated to an average speed of 73.968 miles per hour. In 25 such events at Du Quoin, only the 1 hour, 24 minutes and 15 second clocking in 1954 was slower when Don O’Dell won the race in a Packard.

The caution flag was waved six times for almost one-quarter of the 100 miles.

An oddity was when the race leader, Ramo Stott of Keokuk, Iowa, blew his right rear tire entering the south turn on the 27th lap. Stott had been the fastest qualifier at 38.30 seconds and started on the pole.

Earlier, Jack Bowsher had gone out after only eight laps and Don White pulled into the pits on lap 14 with engine trouble. Only 10 of the 28 starters were still around when the checkered flew.

Feldner grabbed the lead after Stott left, gave it up for the mandatory pit stop and then regained the lead on lap 58. He had some luck in getting on top again as leader Ken Rowley hit the north turn fence on lap 52 after a collision with Kevin Housby.

Charlie Glotzbach of Sellersburg, Ind., was then thrown into the lead for four laps before Feldner took over for good.

Fans had some hopes for a stirring finish when the green flag for lap 80 found Feldner, Sal Tovella and Bay Darnell of Deerfield, Ill., bumper to bumper for the lead.

There were no thrills, however, as Tovella fell farther and farther back. Darnell dropped back even farther and had to coax his car just to finish fourth behind Jim Hurlbert, who had moved into third-place.

The victory by Feldner saved some face for the Dodge boys. This was the fifth straight year a Dodge model had been the winner. Stott, Tovella and Rowley, all driving Plymouth Volare’s, had their chance for victory.