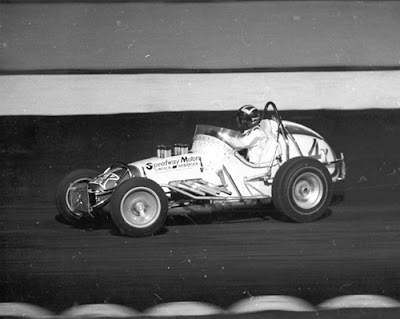 On the track he was equally distinguishable. This time it was his foot rather than his head that caught everyone’s attention as the 29-year-old driver set fast time and then lead-footed his Speedway Motors Chevy to feature laurels.

The Lincoln, Neb., racer piloted his car around the half-mile at a 23.63 second clip to barely miss Jud Larson’s record of 23.55 seconds set with knob tires in 1956.

In the 30-lap feature, Opperman charged from his sixth starting position at the drop of the green flag. By lap 3, Opperman was all by himself out front, having slipped under Dick Sutcliffe of Greenwood, Mo.

Buzz Rose of Lomita, Calif., piloting the Burger King Special, protected his pole position in the consolation run and took the checkered flag by a comfortable margin.