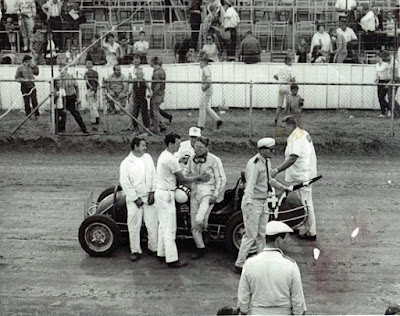 Greg Weld is greeted by well-wishers on the frontstretch after winning at Eldon.

Eldon, Iowa (August 13, 1964) – Eluding the dust clouds by getting out front and staying there, Greg Weld displayed as much finesse behind the wheel of a big sprint car as when chauffeuring super-modifieds here Thursday afternoon.

The Kansas City, Mo., comet won the 20-lap feature of the Wapello County Fair speed program with some 3,000 spectators cheering him on.

It was Weld’s first victory in an International Motor Contest Association-sanctioned sprint car race. Last week, he finished second to his brother, Kenny, in the National Super-Modified Championships staged at Knoxville, Iowa. Greg won the super-modified title in 1962.

Weld, who is only 21-years-old, was pushed throughout the feature by Jerry Daniels of St. Paul, inn. The main event was run in 9 minutes and 14 seconds.

Numerous spinouts brought out the yellow warning flag on several occasions. There were no serious accidents.

The Wapello County Fair’s defending champion, Gordon Woolley of Waco, Tex., finished third after a vain effort to work his way past the leaders.

Another 5-lap match race gave Woolley his chance. He finished ahead of Daniels with a time of 2 minutes and 18 seconds.

Daniels had the fastest time in qualifying, touring the big half-mile in 25.01 seconds.

The 10-lap consolation race was won by Johnny Meyers of Decatur, Ill. Jim Moughan of Springfield, Ill., was the first heat winner and Jay Woodside of Wichita, Kan., won the third heat.