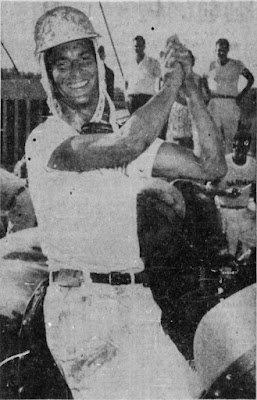 Bobby Grim was victorious at the Iowa State Fair.
Des Moines, Iowa (August 28, 1955) – Bobby Grim, the hurrying Hoosier of the dirt track world, ran away with the 10-mile Midwest Sprint Championship before 20,000 sweltering spectators at the Iowa State Fair on Sunday afternoon.
In fact, the Indianapolis veteran put his black Offenhauser so far in front of the field that the International Motor Contest Association point leader was never challenged.

Even when the race was halted by two crack-ups through the seventh lap, causing a single-file restart with the leaders only a wheel apart, the winner had no competition.

He covered the 10 miles in 9 minutes and 3.65 seconds, considered fairly fast on the hard, slippery half-mile track. The IMCA record is 8 minutes and 36.94 seconds.

The big contest was some 400 back of Grim, with Don Hutchinson of Kansas City, Ken Gottschalk of St. Louis, Red Hoyle of Colona, Ill., and Bob Cleburg of Rio, Wis., bunched in a fight for second place.

Hutchinson, one of the qualifying heat winners and fourth fastest in time trials, finally moved 200 yards ahead at the finish to take runner-up money.

After setting quick time in qualifying with a time of 26.01 seconds, Grim barley placed third in his qualifying heat, won by Cleburg, the IMCA rookie of the year for 1954.

Eddie Zimmerman of Urbana, Ill., captured the Australian Pursuit race when he passed Cecil Burnaugh of Los Angeles, Calif., and Harry Moyer of Crown Point, Ind., on the ninth lap.