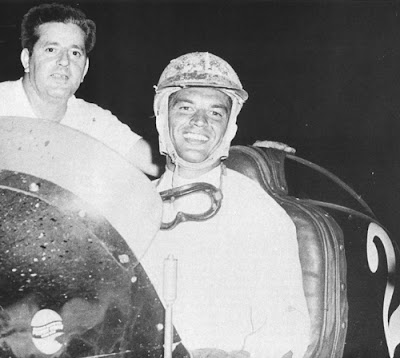 Algona, Iowa (August 18, 1954) - Bobby Grim, one of the leading dirt track drivers of the present crop, at the wheel of the powerful Honore Offenhauser had very little trouble taking most of the honors Wednesday afternoon at the Kossuth County Fair.

Grim simply had too much motor for the rest of the field, although the paid crowd of 2,556 didn't get to see the car opened up very often. He took the time trials easily, won the first race event and the 15-lap sweepstakes which wound up the afternoon.

Andy Anderson nosed him out in a special 3-lap, three-car event that also involved Stan Calloway in the best race of the day.

The track was in perfect shape, and due to the heavy rain the night before, didn't need to be watered down.

Anderson was runner-up to Grim during the three hour show as he scored two firsts, but a third man, Lou Holland, driving a GMC powered rig, showed more fearless driving than the rest of the drivers combined.

Holland won a 5-lap event by maneuvering his car in such a way that big Don Branson couldn't get around him, and several other times demonstrated he had plenty of courage with his zig-zag driving. He finished second in the 10-lap Australian pursuit as Branson- passed him a hundred feet from the finish line.

Many of the cars had engine trouble during the day, as demonstrated by the final race. Two of the 11 cars present wouldn’t run by this time, so nine went to the post. By the end of the 15 laps, five were left, and one that dropped out was Anderson, on the 14th go-around.

Grim drove high on the corners and wide on the straightaways as he cat-and-moused his way to the win.