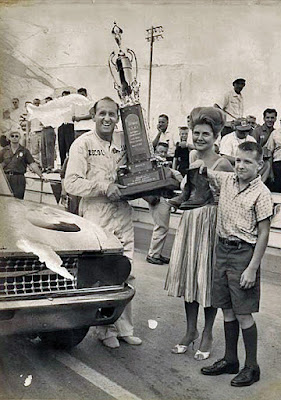 Eddie Sachs hoist his trophy after winning the 200-miler in Milwaukee.

Nelson was seeking his second straight victory at the Milwaukee Mile after copping Sunday’s 150-miler.

Norm’s winning purse Sunday had amounted to $2,746. His gross earnings for Thursday? $81. The Racine, Wis., driver was officially credited with 24th place in the 200-mile grind which found only 17 of the 41 starters still running at the end.

Earlier, Nelson had clocked 94.014 mile per hour on his qualifying lap to break the old mark of 93.701 miles per hour set by Don White of Keokuk, Iowa, last Sunday. However, White then grabbed the record right back when he qualified at 94.966 mile per hour performance of his own.

White and Paul Goldsmith joined Nelson in the “crying towel” ranks during the race proper. White was particularly unfortunate, leading the race after 193 miles before forced to make a pit stop for gasoline. His engine killed during the refueling and all efforts to get White back in the race failed. He was through for the day and credited with seventh-place. Goldsmith’s engine blew after 147 miles while he was running in fifth place.