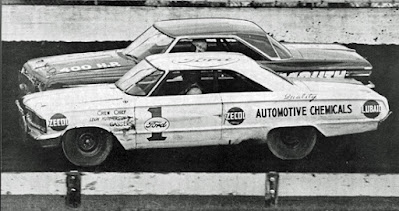 Dick Hutcherson (1) and Ramo Stott battle early on during the 200-lap IMCA late model feature at the Iowa State Fair.

“Handsome” Dick, who made only two pit stops, led all the way, finishing seven laps ahead of his hometown rival Ernie Derr in a record time of 1 hour, 35 minutes and 54 seconds. Hutcherson also broke two other records.

Washburn had second place nailed down for 120 laps of the race until he broke an axle and limped the rest of the way, allowing Derr, Funk and Jusola to slip by him.

Derr, a five-time national champion, went into a slide coming off of turn four on lap 2 and was hit by fellow townsman Ramo Stott. Derr was forced to return to the sidelines to unbend a damaged fender, losing four laps in the process.

“If Ramo hadn’t straightened me out, I would have been in trouble,” Derr explained afterwards.

Stott pushed Hutcherson until lap 76 when he was forced to the pits with a broken rear axle. Stott managed to get back in action on lap 83, finishing seventh, 26 laps back.

The rutted track condition sent more than a dozen other cars in the starting field of 21 to the pits for frequent repairs.

Hutcherson, who made a 15-second stop for fuel at the halfway mark in his record-breaking drive, revealed he made his second stop “only as insurance”.

“I probably could have gone the whole distance without any stops,” grinned the Keokuk contractor, who won the Iowa International 300 here last month.