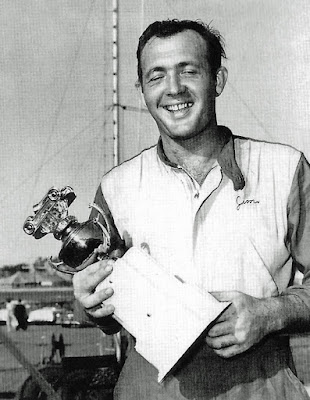 His time for the 25-mile International Motor Contest Association big car event was 20 minutes and 28 seconds, bettering by 48.5 seconds the previous record set by Emmett “Buzz” Barton two years ago on the same half-mile dirt oval.

The victory capped a week of brilliant driving by the muscular used car salesman out of Anderson, Ind., taking four first-place finishes and one runner-up finish in five feature events.

His near-sweep was worth $4,555 in prize money, the largest purse ever earned by one driver in State Fair competition.

McWithey credited his victory in the feature to a discovery of a faulty balance and steering during warmups. Some fast work in the pit area and some borrowed parts from fellow racers put McWithey’s car on the track in time to record what Jim termed,” My greatest week of racing.”

Richert overtook Glen Anderson of Owatonna at the 4-mile mark when the leader’s car developed an oil leak. A heavy cloud of smoke streamed from Anderson’s car, but he was able to hang on for the final two miles to finish second.

Eddie Sachs of Center Valley, Penn., sped into second-place at the 15-mile mark but couldn’t close on and the red and yellow Estes Offenhauser of McWithey.