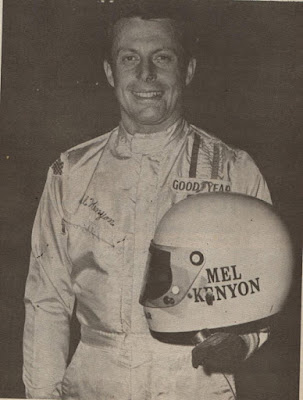 Cedar Rapids, Iowa (August 2, 1977) – The “mighty” midgets invaded Cedar Rapids, Iowa, and Hawkeye Downs Speedway for special USAC-sanctioned show on Tuesday, August 2, 1977, and when the dust settled it was a former hometown boy named Mel Kenyon that was in victory lane. Kenyon had attended school in Cedar Rapids through the ninth grade and lived in Davenport, Iowa until 1967.

A crowd of more than 6,000 people watched the return of the midgets, the first time competing at the half-mile since the late 1960’s.

Kenyon, driving out of Lebanon, Ind., and the current USAC midget point’s leader, started on the inside second row, took the lead on the 12th lap and simply outran the field. Johnny Parsons of Speedway, Ind., took over the second spot from Stan Fox of Janesville, Wis., in the late stages and made a run towards Kenyon but ran out of time and laps. Fox finished third followed by fast timer Ron Shuman of Tempe, Ariz., and Ron “Sleepy” Tripp of Costa Mesa, Calif.

Several drivers experienced problems during the feature race. Among them was Indy star Johnny Rutherford who pulled out on lap five of the 50-lap race with mechanical problems. On lap 29, Tom Steiner of Orland Park, Ill., flipped in turn three. He was not seriously injured but was finished for the evening. Another favorite, Lee Kunzman of Guttenberg, Iowa, suffered mechanical problems and was unable to make the feature event.