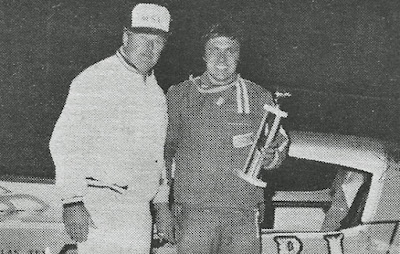 Plank, who started on the pole, had a quarter of a lap lead over the rest of the field by lap 18.

Three cars crashed on the backstretch on lap 19, bringing out the red flag. Bob Saterdalen, Mark Noble and Don Berger were sidelined, but uninjured, because of the mishap.

Plank would open up a substantial lead on the restart and was followed to the finish line by Canada’s Tom Nesbitt, Punky Manor of Altoona, Wis., Verlin Eaker of Cedar Rapids, Iowa and Darrell Zweifel of Rochester, Minn.