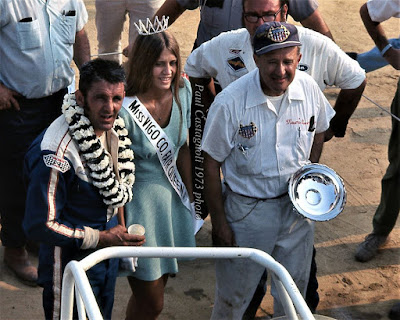 The track title was worth an extra $1,000 to the driver from Nashville, Mich., who closed on the leader in the USAC points race for the division. Sessions now has 581 points to trail leader Rollie Beale, who was fifth yesterday on the clay oval at the Wabash Valley Fairgrounds, by 87 points.

The yellow flag was out for a good portion of the feature, especially on the 10th lap. It took three attempts to complete that turn around the oval.

Duane “Pancho” Carter was the first to be knocked out of the race. The Californian hit the cushion high on the track, heading into the first turn, and flipped three times.

He made contact with the guardrail and flipped over, coming to rest outside of the track, where a fence probably prevented his car from continuing into the carnival area of the fair.

Carter had some bruises and a cut over one eye but didn’t require hospitalization.

Then, with the race restarted, Rich Leavell and Johnny Parsons were knocked out of action when they were involved in a mishap on the backstretch. Leavell, trying to avoid a slower driver, spun and lost his front wheel. That wheel hit the right side of Parson’s car and he flipped, coming to rest against the guardrail. Neither driver was injured.

Nothing happened again until lap 32 when Bruce Walkup spun coming out of the fourth turn where he was hit by Bill Cassella.

Walkup lost his opportunity to win the Action Track title in the accident. Had he held on to finish in the top five – ahead of Saldana, where he was running at the time, he would have earned the extra $1,000 for having the most points in 1973 sprint car races here.

As it were, Sessions – who had not been in the top five here prior to Sunday – took home that honor with 89 points. Saldana, winner of the Hulman Classic, was second and earned $300 while Rollie Beale finished fourth with 79 points and won $200. Walkup was a point back of Beale.

“You were able to run high out there today. When you run high, the track is in good shape,” remarked Sessions.

In addition to mishaps whittling the number of finishers to nine, engine problems in hot laps caused other drivers to cancel the day’s activity before time trials, including Charlie Masters, George Snider, Bill Engelhart and Jackie Howerton.

Former sprint champ Larry Dickson didn’t even make the trip because of car trouble while touted East coast challenger Jan Opperman didn’t show. He said he had problems with his car even though earlier he said that he would be driving the #4 car piloted by Bill Puterbaugh in the feature.