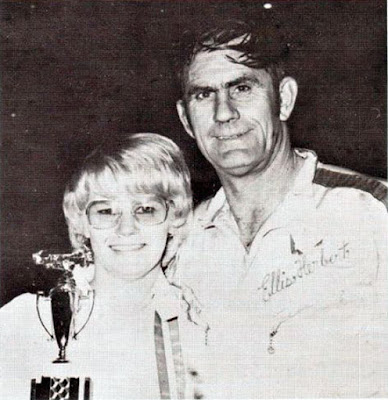 While never appearing to attack the leaders, the 47-year-old Rushville, Ind., driver captured the biggest win – and purse – of his 26-year racing career, in the American Speed Association-sanctioned International 500.

Starting in the fourth position, Herbert stayed in contention throughout the race. But he never elected to challenge the blistering pace set by early front runner Billy Howell and 1975 champion Dave Sorg.

Howell and Sorg both later encountered engine troubles and dropped out of the race.

“We figured we’d be really competitive if we could just stay in the race,” Herbert said afterwards. I didn’t want to run too hard early.

It appeared that Herbert was fighting for second until Lonnie Breedlove, who had taken over the lead on lap 376 when Sorg dropped out, went to the pits for gas on lap 437. Herbert grabbed the lead but relinquished 10 laps later when Breedlove, in a faster Camaro, shot past him in the third turn.

Breedlove continued to build a lead, and by lap 485 seemingly had the race won. But Breedlove pitted again – for gas. The fuel pickup in Breedlove’s tank malfunctioned, and the tank wasn’t draining properly.

Breedlove came back on the track but by this time, Herbert had a one-lap lead and was closing hard on the checkered. He finished under the yellow due to a spinout by Paul King on lap 498.

Breedlove’s crew were somewhat upset about the racing being completed under the caution flag. Had the spinout occurred before the 495th lap, the count would have halted there until the green flag came back out. Since the caution didn’t appear until lap 498, the race was allowed to finish under yellow.