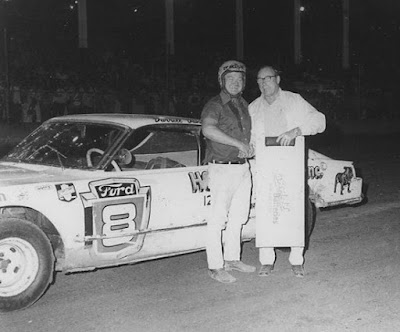 Darrel Dake is awarded his trophy from promoter Homer Melton after his feature win at Davenport.

Dake took the close win over Lem Blankenship of Keokuk and Dean Montgomery of Milan, Ill.

An estimated 8,000 fans jammed the fairgrounds to see the opening half of the double-session racing program held in conjunction with the Mississippi Valley Fair.

Roger Dolan of Lisbon held the early lead until John Connolly of Delhi took over with Dake right on his bumper.

The veteran driver made his move with four laps to go in the 25-lap feature after a crash caused a restart. Dake grabbed the top spot on the green flag and then fended off a hard-charging Blankenship to score the victory.

Gary Kerres of Edgington won the sportsman feature as he continues to hold first place in that division’s point standings.