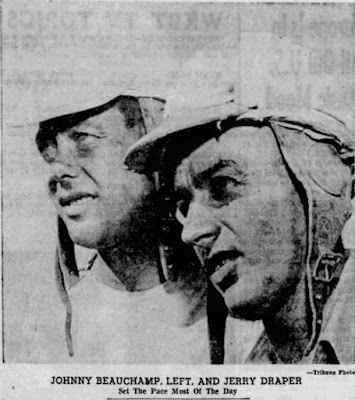 La Crosse, Wis. (August 11, 1957) – Johnny Beauchamp of Harlan, Iowa, drove his fuel-injected Chevrolet to a pair of victories at the Inter-State Fair Speedway on Sunday before crowds of 4,500 in the afternoon and 4,000 during the evening.

Jerry Draper of East Moline, Ill., pressed Beauchamp in the afternoon feature, finishing second, but was forced out after only 39 laps in the 100-lapper because of motor issues. Draper had been leading the night event before retiring to the pit area.

Dick Johnson of St. Paul, Minn., grabbed 4-lap novelty heat. Four cars started hub-to-hub. After one lap, the drivers stopped in front of the bleachers and ran around the car; after two laps, they ate a piece of blueberry pie; after three, drank a soft drink and then finished the race. It proved to be a popular event with the crowd.

Beauchamp won the challenge from Draper in the 25-lap feature in 11 minutes and 26.25 seconds with Darrel Dake of Cedar Rapids, Iowa, coming in third.

Dake was unimpressive in preliminary events but came on strong in both features. Bartholomew, who had to cancel out night racing activity, finished fourth and Bob Hardy of Beaumont, Tex., was fifth.

Beauchamp would win the 100-lap feature by a one-lap margin over Dake. Beauchamp won the race in 51 minutes and 10.55 seconds. Hardy, Don McDonald of Neenah, and Earl Ness of Green Bay rounded out the top five finishers.

As in the afternoon, Draper won the first heat and Beauchamp took the second heat.

Draper set the afternoon’s fast time, with 33 second flat lap around the half-mile.