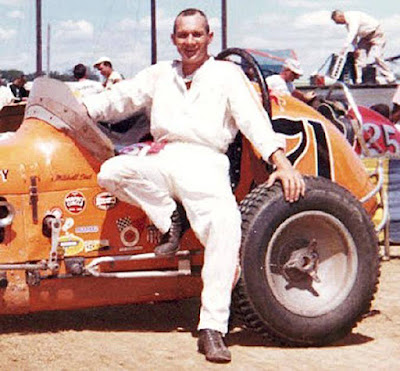 Shepherd, the lean, lanky veteran, won the first heat and the 15-lap main event in his Offenhauser. And in each case, he admitted the first turn was the key.

Starting on the outside of the front row, he slipped between two cars on the first turn and took the lead for good.

But that was only part of it. “When you get there, you better hang your hoof in it or you’re gonna get passed,” he said.

And that’s what he did, beating second-place Leroy Neumayer of Compton, Calif., by a wide margin. Shepherd finished the event in 6 minutes and 16.19 seconds.

In the first heat event, A.J. (“name’s Alfred, Junior, that’s why I use A.J.”) moved from the back of the pack to challenge on the first turn, then took first place from Jerry Richert, Forest Lake, Minn., on the fourth lap.

Shepherd, the number two man in the International Motor Contest Association point standings, drove one of three participating Offenhauser's of the Dizz Wilson stable. Second-place Leroy Neumayer, drivers another and Mickey McCormick of Mitchell, Ind., piloted the other to a fourth place finish.

After Shepherd took over first place, Neumayer hung back, looking for an opening which never came. “I didn’t want to eat all that dirt, and I knew I couldn’t pass him,” Neumayer said.

Woods, a midget driver, piloted a speedway car for only the second time ever.