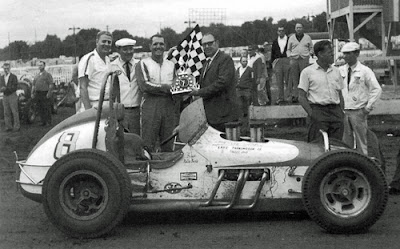 Richert, the defending IMCA sprint car national champion who blew an engine in Sedalia. Mo., on Saturday, did it again here on Sunday and consequently wasn’t running at the finish.

Jerry, no better than seventh quickest in time trials, led from lap 7 to lap 12 before losing his radiator hose and backing off the pace. His pit crew frantically waved him on to continue and the current point leader slammed his foot to the floor. He was in sixth place when he had to pull in on lap 19 with a smoking engine.

Meanwhile, Daniels grabbed the top spot from Beale on lap 17 but the margin wasn’t much as the two dueled side-by-side for the next three laps.

Beale regained the lead and held a slender margin the rest of the way as Daniels applied pressure but couldn’t muster a pass.

Beale earned his starting spot in the feature with a second-place finish in the 10-lap consolation – a rip-roaring duel between him and winner Bill Puterbaugh of Roxana, Ill., driving the Hector Honore Chevy.

The program also marked the inaugural appearance of Aldo Andretti, twin brother of the more famous Mario Andretti, that of Indianapolis 500 fame. Also spun out in the third heat, couldn’t crack the top-five qualifiers in the consolation.