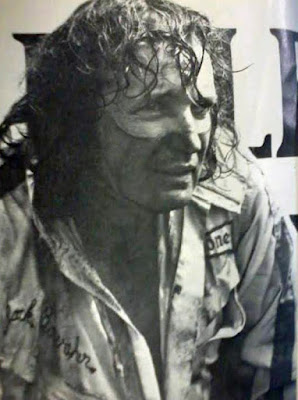 A dirty and exhausted Jack Bowsher relaxes after winning the State Fair Century at the Indiana State Fairgrounds.

Bowsher’s right rear tire had been losing air the last 10 laps of the 100-miler. And it let go as he was racing down the backstretch just one-half mile from the finish line. The Springfield, Ohio, chauffeur nursed his swaying Ford Torino through the final corner and beat a rapidly closing Butch Hartman in a Dodge Charger to the checkered flag by two car lengths.

“I felt the tire go and I saw him coming up behind me,” Bowsher said. “I thought if I could get through the corner one more time, I could run the wheels off it down the straightaway.”

Averaging 84.517 miles per hour for the distance in the blistering heat, the exhausted driver had to be doused with a bucket of ice water before he could take part in the post-race presentation.

He was further taking punishment from an engine whose oil temperature was running way above normal.

With Ramo Stott of Keokuk, Iowa, setting a track record of 93.726 miles per hour to take the pole position, Bowsher started on the outside of the front row and led laps 1 through 8, with the first five being run under yellow when Bob Whitlow of Warren, Mich., hit the outside wall in turn two.

On lap 25, Bowsher almost outengineered himself. He made his mandatory pit stop on lap 25 under a yellow flag for a stalled Charlie Glotzbach, and this made a long way to go for his Firestones on a slick, hard track which was tough on the rubber.

His victory was salvaged by virtue of a 14-second lead which he built up over Hartman. When his rubber began to go bad, he had enough of cushion that he could ease up a little bit and hope to hold on at the finish.

“I kept signaling the crew at 90 laps that the rubber was starting to go,” he remarked. “Then I kept trying to drive it as straight as I could in the corners to make it last.”

Hartman’s crew apparently picked up the signal, because the Ohio speedster began putting on the pressure, whittling the time difference down on every circuit.

While Bowsher had led from lap 37 to the finish, Stott, Hartman, and Norm Nelson were engaged in a three-way battle at the halfway point for second through fourth positions.

Hartman got past Stott to put the lock on second place with Nelson finishing third at the end. Ralph Latham of Cincinnati came from his ninth starting position to take fourth and Stott settled for fifth.