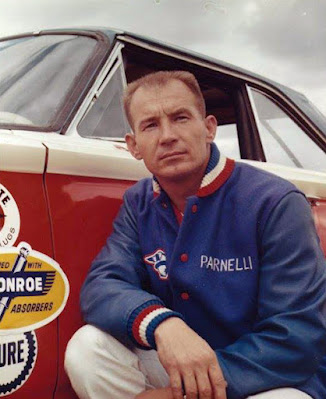 West Allis, Wis. (August 15, 1963) – Parnelli Jones of Torrance, Calif., flashed home in a record speed of 93.75 miles an hour over a 200-mile course Thursday to win his second late model stock car victory with in a week at the Wisconsin State Fair.

Jones, winner of the Indianapolis 500 this year, finished 12 seconds ahead of Don White of Keokuk, Iowa, Jones drove a 1963 Mercury and White piloted a 196 Ford.

Whitey Gerkin of Franklin Park, Ill., finished third Thursday in a 1963 Ford; A. J. Foyt of Houston, Tex., was fourth in his 1963 Plymouth: and Norm Nelson of Racine was fifth in a 1963 Plymouth.

Nelson had held the previous record for the mile oval state fair track in the 200-mile event. He set a record speed of 91.479 miles an hour September 16 of last year.

Jones again won the pole spot as he did last Sunday, qualifying Thursday with a speed of 96.87. He took the lead on the first lap and held it through 100 laps, making his first pit stop on the 101st tour.

White and Foyt gave him his chief competition, but Jones regained the lead on the 109th after a short 26-second pit stop. White and Foyt were edged on the pit stop difference, requiring 37 and 65 seconds, respectively, for their stops.