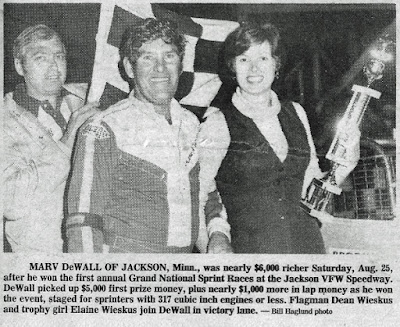 Jackson, Minn. (August 25, 1979) – Fast and steady, Marv DeWall moved from his sixth starting spot to the front of the pack Saturday night as he laid claim to the title in the first annual Jackson Grand National Sprint Championships at the Jackson VFW Speedway.

DeWall stayed among the leaders in the early going, but once the starting field got itself strung out, he began picking off the front-runners. He moved in to challenge race leader Bobby Geldner of St. Peter, Minn., and shot past him and into the lead on lap 20.

The Laurens, Iowa, based Valentine Racing Team sprinter stayed out front the rest of the way, claiming the $5,000 first place money and some the $60 lap money provided by the Jackson merchants.

Gary Scott of Holts Summit, Mo., got past Geldner for second place and managed to close the gap on DeWall, but was unable to mount a serious challenge in the late stages.

Jack McCorkell’s ride to seventh place in the finale was a story in itself at the Saturday night show.

McCorkell experienced problems both Thursday and Friday while attempting to qualify for the “A” feature through a point system established by the Jackson VFW racing committee. Because he failed to qualify, McCorkell was placed at the rear of the 15-lap “C” feature, but he quickly moved through the field of cars and won the event to advance to the rear of the “B” feature.

Again, McCorkell threaded through traffic to win the accident-stopped “B” feature to earn a spot at the rear of the “A” main. Starting 21st in the main event, the Redwood Falls, Minn., pilot passed 14 cars to finish an impressive seventh.

The Saturday night crowd of about 7,000 fans is said to be the largest ever to view a race at Jackson VFW Speedway, which has seen 26 consecutive years of operation.