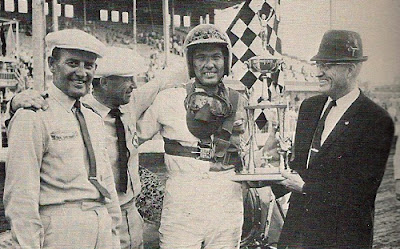 Des Moines, Iowa (August 26, 1967) – The winner was different, but the victory pattern was the same in Saturday’s IMCA sprint car races at the Iowa State Fair.

A crowd of 6,000 saw Jerry Blundy of Galesburg, Ill., earn the pole position in time trials, then lead from green to checkered in the 30-lap feature.

It was the same formula Jay Woodside of Kansas City used a week ago in the first sprint car main. Woodside wasn’t on hand Saturday, choosing to run the asphalt at the Minnesota State Fair.

Blundy, like Woodside last week, also won the consolation race, again leading from start to finish. He earned $800 for winning the feature.

A morning rain failed to soften the track which became slick under the heavy traffic.

“The pole was the place to be,” said the 39-year-old Blundy after his victory. “There was just one place to run – along the rail. It was difficult to pass anyone.”

‘Gentleman’ Jim Moughan of Springfield, Ill., did manage to pass Dale Reed of Wichita, Kan., on the last lap to nail down second place.

Reed had been running second throughout the race, but his engine started smoking badly on lap 28 and he couldn’t hold off Moughan, who won the Hawkeye Futurity earlier this summer.