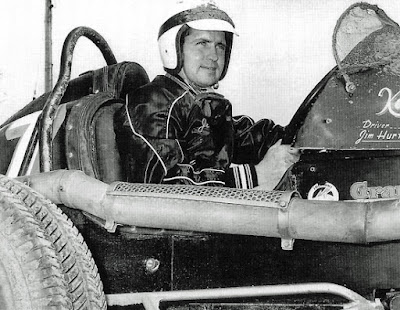 Two new track records were set in racing that saw one pilot ride the concrete retaining wall and another spin out in the thick of the action in the main event.

The husky youngster Hurtubise started in the pole position, grabbed the lead in the first turn and held it all the way. He drove a flawless race and was never in trouble.

Jack Rounds of Huntington Beach, Calif., driving the Wilson Offy, chased Hurtubise all the way but was out of contention by lap 12.

Jerry Kemp of St. Louis, Mo., driving the Kephart Offy, had the close call, getting the car on the concrete wall just off the first turn and tearing down almost 50 feet of fence and canvas. He managed to get the car back on four wheels and limp to the pit area.

On the final lap, Jerry Richert of Forest Lake, Minn., spun out on the second turn. Leaving his car crosswise on the racetrack but skillful driving avoided a crash.

The program got off to a fast start as A.J. Shepard of Gardena, Calif., driving the Abajian Offy, to win the 8-lap first heat and setting a new track record of 3 minutes and 8.11 seconds. Shepard came from his sixth starting position to outduel Parnelli Jones of Torrance, Calif., for the win.

Bob Cleburg of Tucson, Ariz., won the second heat, working his way up through the field after starting in the sixth position as well. Jerry Kemp of St. Louis, Mo., won the 6-lap third heat and set a new track record turning the 3 miles in 2 minutes and 28.13 seconds, to break the old mark of 2 minutes and 30 seconds set by Leon Hubble in 1954.