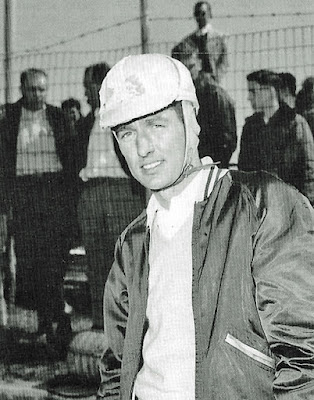 Des Moines, Iowa (August 24, 1952) – Robert Slater, the skinny 35-year-old Kansas City graduate of midget race cars, tossed dust on a few favorites on Sunday afternoon as he roared away with the 20-lap feature.

He finished six car lengths ahead of Bobby Grim of Indianapolis, one of the big names on the International Motor contest Association circuit, to win going away before a throng of 27,000 in the Iowa state Fair’s 20-lap grind.

Bill Holland, the Reading, Penn., veteran who was scheduled to renew his duel with Grim, was forced out by a jammed throttle on lap 13 after running in third place.

Slater, who averaged nearly 100 miles per hour in the Tom Randol-owned Offenhauser to capture the Missouri Futurity at Sedalia, Mo., only the day before, was clocked in 9 minutes and 3.27 seconds for his 10-mile romp on Sunday.

The IMCA record for that distance, 8 minutes and 36.94 seconds set here two years ago by Frank Luptow, and others withstood the assault of the big car drivers although one track record was unofficially lowered.

Jimmy Campbell, the heavy-footed farmer from Bates City, Mo., warmed up his Offenhauser with a reported 23.71 second trip around the rutted half-mile to shade the official mark of 24.38 seconds.

However, when the Missourian, who lifted Luptow’s Sedalia mark only 24 hours earlier, attempted to get an official clocking he slammed his racer into the west wall, wrecking his machine.

Third place money went to Red Hoyle of Cedar Rapids, some 22 yards back of Slater and Grim. Hoyle had earlier chalked up the fastest time in qualifying with a time of 24.40 seconds.