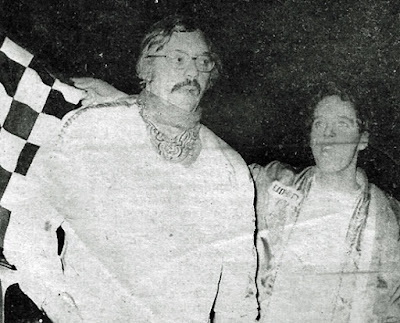 Boone, Iowa (July 31, 1973) – George Barton of Ankeny, Iowa, grabbed the lead on lap 36 and went on to win the Grand Nationals at Boone Speedway on Tuesday night.

For Barton, it was his third Grand National title in the seven year history of the event.

Thirty-three cars lined up Indy-style with Arnie Braland of Boone starting on the pole.

However, it was Stan Stover of Reinbeck, Iowa, grabbing the lead at the start. He would maintain the top spot for the first 36 circuits until Barton, who had been hanging on Stover’s bumper throughout, powered inside of Stover to take over first place.

For the final 14 laps, however, Barton and Stover would race door-to-door with Barton finally getting the edge on the white flag lap. With the checkers flying, Barton would edge Stover by less than a car length for the victory and the $1,200 first prize.

In Monday night’s time trials, Ed Sanger of Waterloo, Iowa, earned the pole position by fact that he was the fastest qualifier with a time of 17.32 seconds.

A special event was held Monday night comprised of the top seven finishers from each heat, Ron Weedon was the winner of that contest.