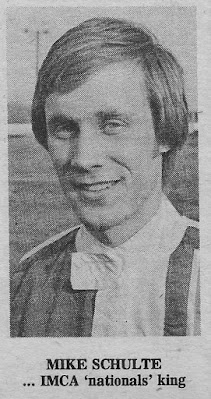 Vinton, Iowa (August 21, 1983) – You really couldn’t blame Mike Schulte of Norway if you heard him say something favorable about 100-lap races at the quarter-mile Vinton Speedway…. after all, he’s won the last three.

Easily the biggest win of the trio, though, was the 100-lap win he posted Sunday in the first Kemper’s International IMCA Modified Nationals at the Benton County Fairgrounds.

Schulte, runner-up Jack Mitchell of Cedar Falls, and third-place finisher Merv Chandler of Cedar Rapids, were covered with dirt following the grueling battle around the quick Vinton oval. Mitchell and Schulte, too, were awash with perspiration following the event in hot, humid weather.

“There for a while…around the 30th or 40th lap…I wasn’t sure if I was going to make it,” Schulte said. “It was so hot in there and I could feel myself weakening. Then we got a red flag and my crew dumped a bucket of ice water on me and that really helped. In fact, I got stronger near the end.”

Schulte started the race in the ninth spot after failing to qualify among the six fastest in Saturday’s time trials but winning the third qualifying heat.

Mitchell started outside in the front row and set the pace in the 38-car field for the first 27 laps before Mike Krall of Waterloo, who started third on the grid, swept past and into the lead. Krall set a blistering pace as he put quite a distance between his car and the trailing Mitchell.

Meanwhile, Schulte settled into the third spot behind Mitchell, then got around him to run second. Krall started to slow and dropped from contention on lap 42 allowing Schulte to scoot into the lead on the 43rd circuit and then was chased by Mitchell the rest of the way.

From that point on, it was a two-car battle, although Chandler got into contention late in the race before he faded in lapped traffic. Mitchell tried a number of times to get around Schulte but couldn’t get the job done.

Lapped traffic was Schulte’s main concern with 26 cars still running at the end.

“I knew if Jack could get me, It’d be because I either made a bad mistake, ot I got caught in lapped traffic,” Schulte remarked.

Race cars from six states were in the pits for the two-day show with time trials and qualifying races held Saturday.

Winning the fast dash was Krall, while the six heat winners were Dan Higdon of Vinton, Buz Kaster of Kansas City, Schulte, Todd Jensen of Waterloo, Lyle Breberg of Dawson, Minn., and Steve Stinger of Hiawatha.

Sunday’s action included two non-qualifier races, won by John Steenstry of Avon, Mo., and Chandler, plus a “B” feature won by Ronnie Parsley of Kansas City.