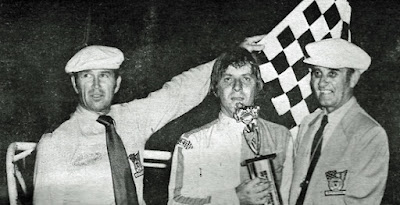 Sedalia, Mo. (August 15, 1975) – Known in auto racing circles as the “King of Kearney”, Eddie Leavitt captured the Missouri Modified Championship for the second time by catching up with Sedalia’s veteran campaigner Bill Utz on the 40th lap and then kept a commanding lead for the balance of the 50-lap feature event.

Utz, who was in command from the outset, staved off Leavitt with his technique on the half-mile track that he had driven so often to victory in year’s past.

The closest finish was in the fourth heat as Bucklew barely edged Rick Weld of Kansas City in the drive down the homestretch. Opperman and Leavitt waged a tremendous duel in the fifth heat with Opperman coming from the rear of the pack to take the checkered flag.

The three-hour program was run under ideal conditions.