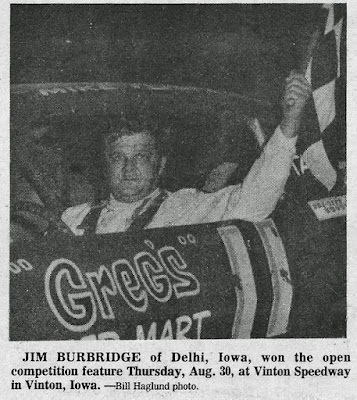 Burbridge was one of several late model drivers to bring their cars to the Vinton quarter-mile and they were dominant. Darrell Sells of Waverly, Iowa, wound up second and Tom Fitzpatrick of Gilbertville, Iowa, was fourth, coming from far back in the field.

Sanger had not qualified for the main event from his heat race, but won the “B” feature to grab the last starting spot in the 20-lap “A” main.

While the “A” and “B” mains were accident free, the 15-lap “C” main was another story. The race was repeatedly stopped as cars flew off with uncanny regularity. Arlo Becker of Atkins, Iowa, driving a modified, won the race.

Heat wins went to Dave Bentley of Fairbank, Iowa, Dave Plum of Waterloo, Jim Buhlman of Waterloo and Fitzpatrick, all in late models.