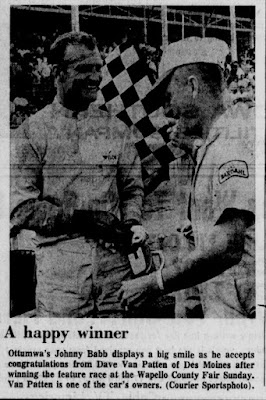 Babb captured the main event of the seven-card program with his Chevy-powered car ahead of Ralph Parkinson of Wichita Falls, Tex., before the largest grandstand crowd in the auto racing history of the Wapello County Fair.

“Winning my first IMCA (International Motor Contest Association) race was even more an honor for me behind a field of some of the finest racing drivers in the United States.”

The finale event was slowed in timing due to a couple of spinouts. Babb broke the photo electric cell light at 10 minutes - a minute and half away from the 1956 record set by Bob Grim at 8 minutes and 36 seconds.

Emory Collins’ Eldon track record of 1949 remained intact for another year on the dirt turf. Collins rounded the half-miler in 24.21 seconds in an Offenhauser, now nearly extinct on the circuit. Jan Opperman of Hayward Calif., was the fast qualifier in time trials, touring the half-mile in 25.43 seconds.

The 1968 IMCA Rookie of the Year, Ron Perkins of Bethalto, Ill., started the racing card off winning the Bob Burman Dash. Springfield, Ill.’s Chuck Lynch nudged out Babb in the Pepsi-dash.

Finishing third last year and in 1967 in the final point standings, Jerry Blundy of Galesburg, Ill., drove his own Chevy-powered car to win the Gus Schrader Dash.