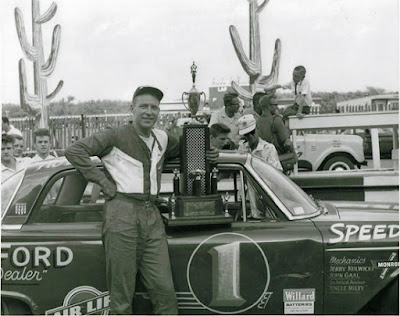 Racine's Norm Nelson poses next to his trophy after winning the USAC stock car 150-miler at the Wisconsin State Fair.

West Allis, Wis. (August 13, 1961) – Seven is supposed to be a lucky number and 13 an unlucky number – but both proved to be lucky Sunday for Norm Nelson of Racine, Wis., at State Fair Park.

It was August 13, but Nelson set two records in winning the 150-miler for late model stock cars. He became the first driver to win seven major stock car races here and he turned the trick in record time.

In receiving the checkered flag first in the United States Auto Club national championship race before 19,921 spectators, Nelson average 89.419 miles per hour with a clocking of 1 hour, 40 minutes and 37 seconds. The old mark set last year by Paul Goldsmith of St. Clair Shores, Mich., was 1 hour, 41 minutes and 43 seconds or 88.469 miles per hour.

Rathmann was the only one of the three-car Bill Trainor-owned Zecol-Lubaid Ford team to finish. Eddie Sachs of Coopersburg, Penn., winner of the July 200-miler, broke a distributor cap after 52 miles and Don White of Keokuk, Iowa, the third pilot, blew the water hosing on his car after 107 miles.

But when the 40 starters roared into the first turn, it was Nelson who was out in front, and he was still there after 16 laps.

White managed to forge ahead on lap 17 and entering traffic. However, a car driven by Richard Kleich of Chicago, broke a drive shaft and lost its brakes, tossing metal and fluid on the south turn. The caution flag was out for eight laps and when the green flag waved on lap 40, it was Nelson back out in front.

Nelson drove 98 miles before going to the pit area for a tire change and gasoline and was fifth behind leader Rodger Ward of Indianapolis when he returned after a quick 27-second pit stop.

At this point, however, none of the four cars in front of him had pitted yet…and Nelson realized each of them would have to do so.

As they began dropping out for pit stops, Nelson began to gain ground. When Ward pitted on the 112th lap, Goldsmith took over, but he stayed in front for only two lap before being forced to gas up. That’s when Nelson took over for keeps.

Of the 40 starters, 22 were still running at the finish.