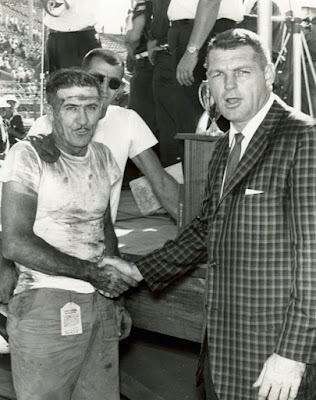 The little Iowan pushed his way into the lead early in the race, when Bernie Hentges of Anoka, Minn., who had taken the lead at the start, crashed into Dick Pellow, Minneapolis, who spun directly into Hentges’ path.

A hard shower interrupted the race on lap 52 and after about an hour, the track was bladed and reconditioned.

Derr grabbed the lead on the restart and was never seriously challenged. He collected $600 for the victory and a large trophy.

Pre-race favorites Don White of Keokuk and Bob Burdick of Omaha finished out of the money. White, caught in heavy traffic most of the afternoon, was scored in 11th place, while Burdick was forced to make a long pit stop when the engine of his 1958 Ford overheated.

Bruce Nystrom of Oshkosh, Wis., blew a tire on lap 72 while running in second. Dropping him back to 13th place.

Derr, White and Burdick all paid $50 fines before the race to get back in the good graces of the International Motor Contest Association officials. The three drivers and car owners had been disqualified Thursday after a teardown revealed their cars were not in accordance with association specifications.