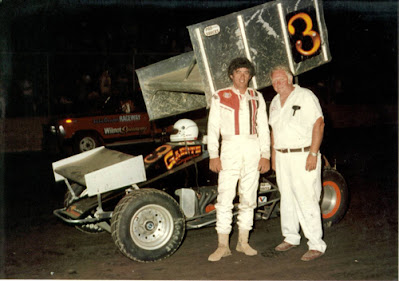 Wilmot, Wis. (August 27, 1983) – Sheldon Kinser, a two-time USAC sprint car national champion from Bloomington, Ind., re-entered the world of winged sprint car racing Saturday night at the Wilmot Speedway and enjoyed his $2,300 victory so much, he admitted to liking it in the winner’s circle.

It was the first time in over 10 years that Kinser had competed in a sprint car with a win attached but he “winged” his way to a win in the final segment of the J&L Gas – Winged Open sprint car series in his first-ever appearance at the popular Wisconsin dirt oval.

Kiner, in his Jack Steck Hoosier Tire sprint car, qualified sixth fastest among the 39 entries topped by Ji Moulis with a time of 15.09 seconds for the third-mile oval left heavy by rain throughout most of the day.

When Dick Colburn’s pole starting car would not fire due to a faulty magneto, Kinser moved up to the outside front row starting spot and led every circuit to win the 40-lap A-main which saw four restarts before the final six laps to Wayne Soder’s double-checkered flags.

Kinser had to fight off a persistent challenge from Jim Moulis for the final 19 laps and finished only a car length in front of Moulis with Ron Standridge and Gib Wiser all on the same straightaway. John Tierney rounded out the top five finishers.

All drivers were able to hook up and run the track deep and wide open with resulting sweeping broadside action through the turns. It was by far the best racing of the three-race series which saw Rick Ferkel win the June race and Doug Wolfgang win the July contest. However, the threatening weather held the attendance down to the smallest of the three races.

Although absent from the final series race, Rick Ferkel wound the overall point series winner to earn $1,000 from the $4,000 J&L Gas point fund.