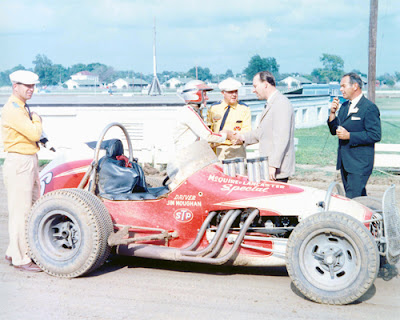 The feature, dedicated to the late Jud Larson, was Moughan’s first victory of the 1966 season. A crowd of 14,000 watched the opening day of automobile racing at the Missouri State Fair.

Jerry Richert of Forest Lake, Minn., had the fastest time in qualifying, touring the half-mile in 24.07 seconds.

Bill Puterbaugh of Roxana, Ill., won the first heat in 3 minutes and 50 seconds with Richert in second, and Bill Utz of Sedalia, Mo., taking third.

Wade was the second heat winner in 3 minutes and 26 seconds with Gordon Woolley of Waco, Tex., in second and Dale Reed in third.

Ken William of Kansas City was the victor in the third heat with Jerry Weld and Wes Ferrand, both of Kansas City, taking second and third respectively. There was no time because of a restart.